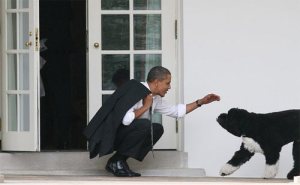 The President gave a grand speech in Atlanta tonight at a fundraiser sponsored by Tyler Perry.  He spoke with genuine emotion that clearly connected with his audience, composed mostly of his base.  But the thing is, he could have given that very same speech anywhere in America and it would have rung true.  America can identify with his values as their values.  It’s what we care about, the economy and shared sacrifice…a basic fairness in the tax system.

Yet the Republicans continue to focus on women’s rights and health care.  They try to distract by pointing to rising gas prices that they KNOW the President does not control.

It reminds me of the Irishman who tossed a stick for his dog to fetch but accidentally threw it into the lake.

Eager to show off his dog’s abilities, he found a Republican who watched as the Irishman’s dog walked across the lake and retrieved the stick.

“That’s not bad,” said the Republican, “but when are you going to teach that dog to swim?”