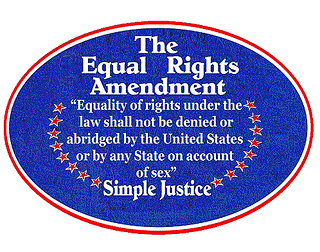 August 26, 2015 marks the 95th Anniversary of the Woman Suffrage Movement’s great victory, the ratification of the 19th Amendment to the U.S. Constitution. This courageous political campaign, which spanned 72 years, was carried out by tens of thousands of persistent women and men. The significance of the woman suffrage campaign and its enormous political and social impact has been largely ignored in the telling of American history, but it is a story that needs to be told. It is a story of women creating one of the most remarkable and successful nonviolent civil rights efforts the world has ever seen.

It’s been a hard-fought battle.

The suffrage movement in the United States gained prominence with the first women’s rights convention in the world: the Seneca Falls Convention in 1848. The convention was organized by Lucretia Mott and Elizabeth Cady Stanton, active members of the abolitionist movement who met in England in 1840 at the World Anti-Slavery Convention. In 1851,

Stanton was introduced by a mutual friend to Susan B. Anthony, who was most active in the temperance movement at the time. The two would form a life-long friendship and collaboration focused on obtaining suffrage. They formed the Woman’s National Loyal League in 1863 to support the Thirteenth Amendment to abolish slavery and to campaign for full citizenship for blacks and women.

But women wanted more. They wanted the right to vote as well…

DID YOU KNOW THAT: Women were the first protest group in US history to picket the White House? Since then, this tactic has been used by many groups to protest for rights. 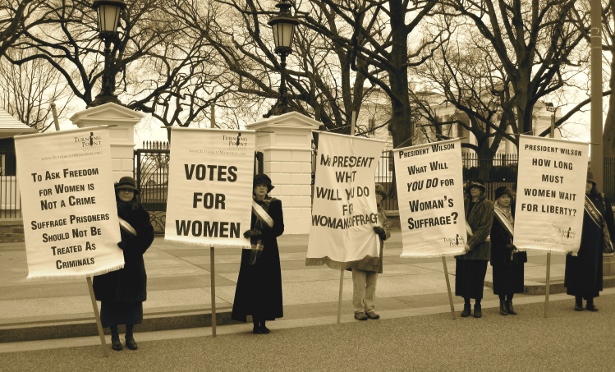 It is all the more remarkable when one considers the barriers the suffragists had to overcome:

DID YOU KNOW THAT: Many early suffrage supporters, including Susan B. Anthony, remained single because, in the early 1800s, married women could not own property in their own right and could not make legal contracts on their own behalf? 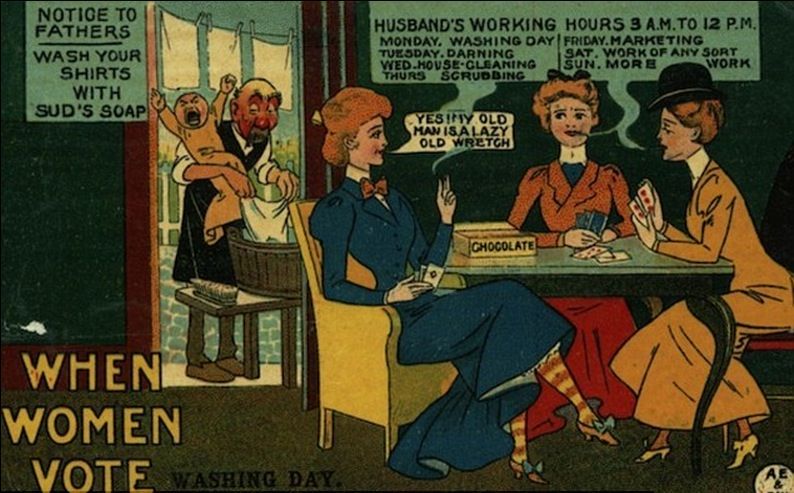 DID YOU KNOW THAT: American women who were jailed for  demonstrating for the right to vote were force-fed in prison  when they went on hunger strikes? 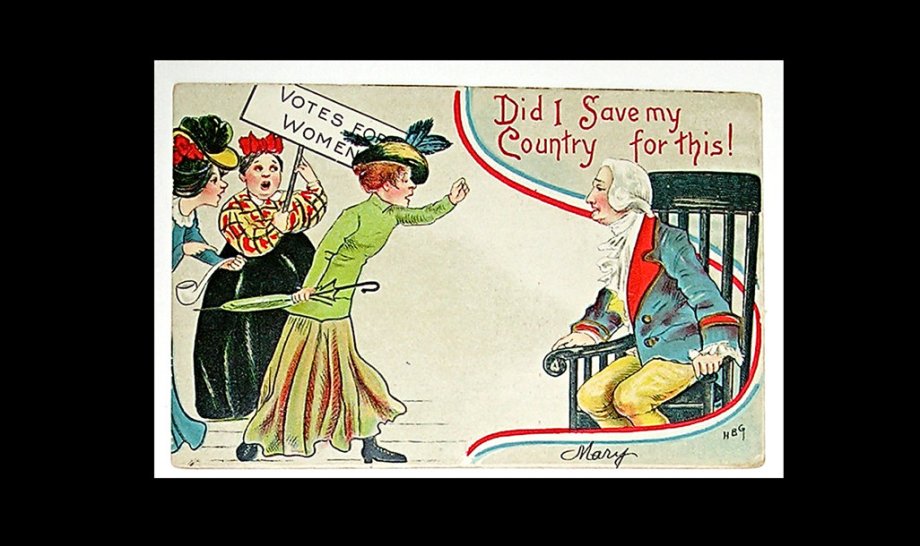 DID YOU KNOW THAT: Alice Paul, leader of the National Woman’s Party, was put in solitary confinement in the mental ward of the prison as a way to “break” her will and to undermine her credibility with the public?

The  Nineteenth Amendment (Amendment XIX) to the United States Constitution prohibits each state and the federal government from denying any citizen the right to vote based on that citizen’s sex.

The Constitution allows the states to determine the qualifications of voters, subject to limitations imposed by later amendments. Until the 1910s, most states disenfranchised women. The amendment was the culmination of the women’s suffrage movement in the United States, which fought at both state and national levels to achieve the vote. It effectively overruled Minor v. Happersett, in which a unanimous Supreme Court ruled that the Fourteenth Amendment did not give women the right to vote. 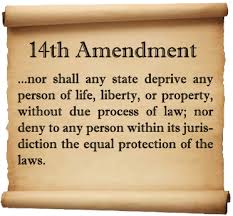 The Nineteenth Amendment was first introduced in Congress in 1878 by Senator Aaron A. Sargent. Forty-one years later, in 1919, Congress approved the amendment and submitted it to the states for ratification. It was ratified by the requisite number of states a year later, with Tennessee‘s ratification being the final vote needed to add the amendment to the Constitution. In Leser v. Garnett (1922), the Supreme Court rejected claims that the amendment was unconstitutionally adopted. 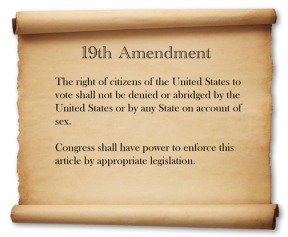 DID YOU KNOW THAT: The nineteenth amendment to the Constitution granting women the vote was passed by only one vote? Tennessee was the 36th state to ratify the Amendment, and it passed the legislature when Harry Burn, a young legislator, changed his vote to “yes” after receiving a letter from his mother telling him to “do the right thing.”

Today, Women want MORE as well. We want ALL our rights to be protected under the Constitution, not just the right to vote. 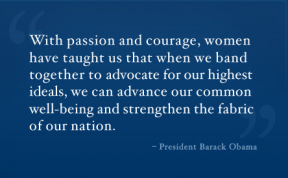 DID YOU KNOW: America women STILL don’t have full equality under the law? 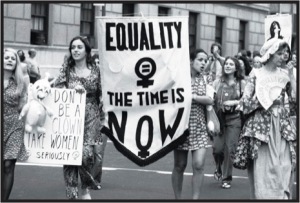 In the 1960’s women again begin to take a stand. Women begin to ask themselves – ‘Is this all there is?’  They were tired of discrimination and began to band together in defense of their rights. Pro-ERA advocacy was led by the National Organization for Women (NOW) and ERAmerica, a coalition of nearly 80 other mainstream organizations.

Women eventually gained a little more legal respect through the Equal Rights Amendment of 1972, but the journey was a long and incomplete struggle that continues today. In 1977, Indiana became the 35th and so far the last state to ratify the ERA. That year also marked the death of Alice Paul, who, like Elizabeth Cady Stanton and Susan B. Anthony before her, never saw the Constitution amended to include the equality of rights she had worked for all her life. We don’t want women today to die without realizing their full rights under the law!

These three sentences comprise the entire text of the Equal Rights Amendment (ERA), affirming the equal application of the U.S. Constitution to both females and males.

The struggle now is to remove the deadline from The Equal Rights Amendment!

There is NO VALID ARGUMENT against gender equality.

Contact your senators and tell them you want them to support removing the deadline. Spread the word. Make them feel the pressure. Be friendly and courteous but be firm!!!!

“There should never be a deadline when it comes to ensuring the rights of any American” ~ Sen. Ben Cardin (D-MD)

Helene Swanson, a resident of Sausalito, California, began her pilgrimage on foot in the Spring of 2014, responding to a spiritual call to bear public witness for the ERA. By August 26,, 2015, often walking alone by the side of the highway, she will have traversed each of the 15 states that have failed to ratify the amendment and pressed legislators in their capitals to take action. Ratification by three more states is needed for the ERA to become a part of the U.S. Constitution. 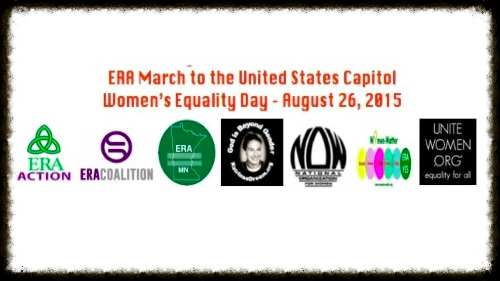 On August 27, 2015, the day following the March and rally, ERA Action in conjunction with Katrina’s Dream, UniteWomen.Org, Equal Rights Alliance, ERA Coalition, ERA Minnesota, National NOW, We Are Woman US, Women-Matter and other women’s groups are coordinating a lobbying effort to call upon senators and representative to co-sponsor S.J. Res 15 and H.J. Res 51 respectively to remove the deadline and bring the ERA to Congress for a vote!

Haven’t we earned it?  Haven’t we waited long enough? 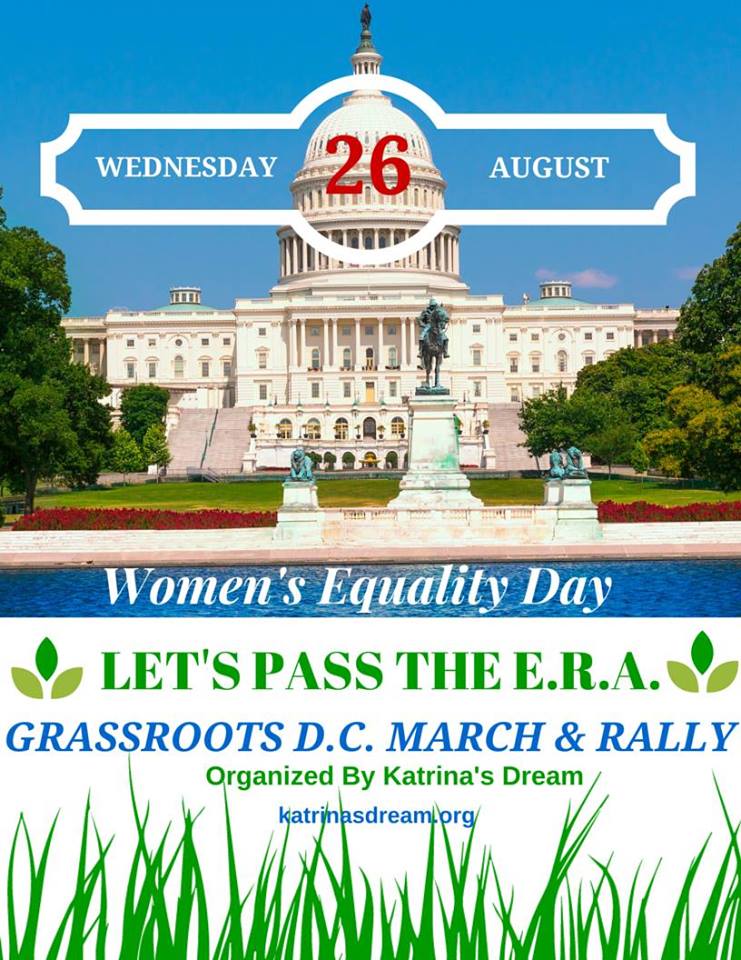 2 comments on “Nineteenth Amendment is NOT enough!”