The Civil Rights Act of 1964 (Pub.L. 88–352, 78 Stat. 241, enacted July 2, 1964) is a landmark piece of civil rights legislation in the United States that outlawed major forms of discrimination against racial, ethnic, national and religious minorities, and women.  It ended unequal application of voter registration requirements and racial segregation in schools, at the workplace and by facilities that served the general public (known as “public accommodations”).

Powers given to enforce the act were initially weak, but were supplemented during later years. Congress asserted its authority to legislate under several different parts of the United States Constitution, principally its power to regulate interstate commerce under Article One (section 8), its duty to guarantee all citizens equal protection of the laws under the Fourteenth Amendment and its duty to protect voting rights under the Fifteenth Amendment. The Act was signed into law by President Lyndon B. Johnson, who would later sign the landmark Voting Rights Act into law. 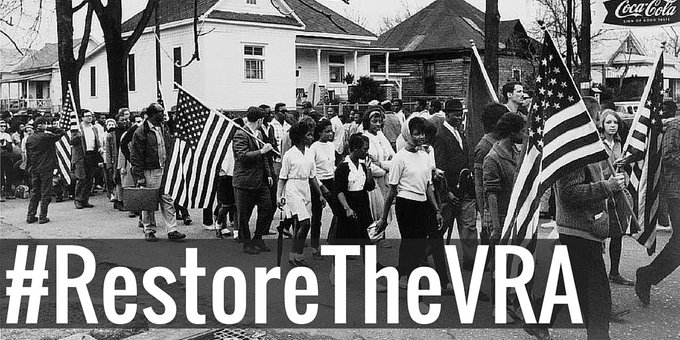 Congress: Honor Dr. King, @repjohnlewis, and all of Selma’s foot soldiers by working to #RestoreTheVRA immediately.

Statement by the President on the Supreme Court Ruling on Shelby County v. Holder

“I am deeply disappointed with the Supreme Court’s decision today. For nearly 50 years, the Voting Rights Act – enacted and repeatedly renewed by wide bipartisan majorities in Congress – has helped secure the right to vote for millions of Americans. Today’s decision invalidating one of its core provisions upsets decades of well-established practices that help make sure voting is fair, especially in places where voting discrimination has been historically prevalent.

As a nation, we’ve made a great deal of progress towards guaranteeing every American the right to vote. But, as the Supreme Court recognized, voting discrimination still exists. And while today’s decision is a setback, it doesn’t represent the end of our efforts to end voting discrimination. I am calling on Congress to pass legislation to ensure every American has equal access to the polls. My Administration will continue to do everything in its power to ensure a fair and equal voting process.”

The Supreme Court just gutted the most important civil rights law in our country — the Voting Rights Act. This decision is an extremely disappointing setback for voting rights in this country. Now it’s up to Congress to enact new legislation to protect the rights of voters, and it’s up to us to make them act.