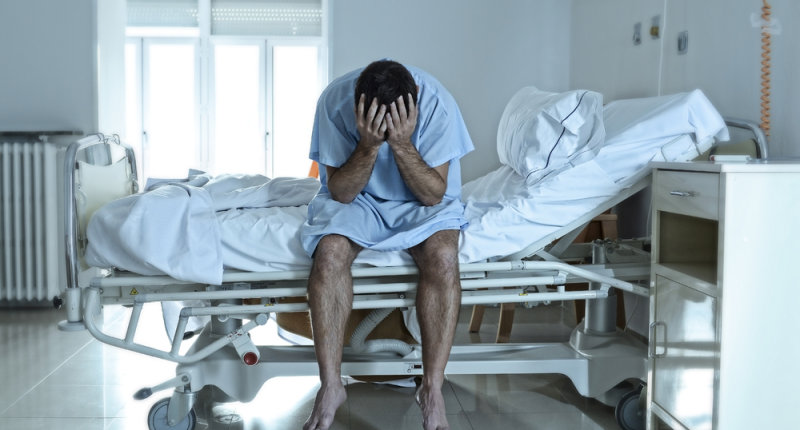 While you were sleeping, Republicans in the Senate took a major step toward repealing the Affordable Care Act on Wednesday night, while simultaneously voting down proposed amendments to make sure people with preexisting conditions could still get coverage.

For more than seven hours Senate Democrats fought the GOP majority in an overnight battle to try to save Obamacare, or at least protect the parts most Americans say they want to keep, but it was an exercise in futility. By 1:25 AM Thursday morning, Senate Republicans defeated every single Democratic amendment, and passed a budget resolution that will allow them to pull the plug on Obamacare. The vote was 51-48. Because Republicans are claiming this is a budget resolution, only a simple majority was needed.

Despite promises from leading Republicans, including President-elect Donald Trump, gone will be the ability for parents to keep their children on their health insurance until age 26, gone will be the ban on insurance companies refusing to pay for pre-existing conditions — including pregnancy, cancer, HIV, and diabetes, gone will be the mandate that insurers must pay for contraception coverage. Democrats filed amendments to save them all, all were defeated. They have no legitimate replacement plan, so despite Donald Trump’s promises, tens of millions will lose coverage. Any possible substitution will not offer a “seamless” transition, as the President-elect promised on “60 Minutes” after winning the election.

Some people took to social media to voice their anger..

“I am livid. Livid. If any child dies because of this (and they will), I hope they haunt anyone who voted for any of these fools. I hope their faces pass slowly in front of you when you sleep and when you wake. If any innocent dies because they have to travel great distances to a hospital because YOU CUT FUNDING, I hope the guilt of that courses through your veins like holy fire. If one college kid dies because they were cut off from their parents’ insurance because of this repeal, I hope almighty God reveals to you all of the good things they would have contributed to the world and you have to watch them wither and die on a never-ending loop.

Because this is all your fault if you voted for any of them. May God have mercy on the innocents as they suffer at your hands.”

PLEASE READ. THIS IS WHAT HAPPENED AS WE SLEPT:

“Last night, at 1:30AM, the Republican Party voted to begin dismantling “Obamacare.”

Rather than let them erase the law and its protections in one swoop, Democrats fought back by proposing amendments to save certain parts, like health care protections for veterans.
Republicans voted against that. (But thanks for your service, vets!)

Then Republicans voted against the rule that says insurance companies have to cover “pre-existing conditions,” (so if you have had cancer, diabetes, or heart problems in the past, good luck keeping even your private insurance now.)

Then they killed CHIP, which is the Children’s Health Insurance Program, which provided healthcare to impoverished sick kids. Again – they voted against health care for poor kids. (So Christlike.)

The Republicans then voted against continuing federal aid to rural hospitals, which is the only thing keeping many of them open. (I guess the joke’s on all those deep-red heartland counties who voted for this one-party rule.)

All you pro-life folks – they also voted against contraception coverage. With no health coverage for their pregnancies, more women will choose abortions to avoid bankruptcy. (Oops!)

Also, that rule saying you can keep your kids on your private insurance until they’re 26? Gone.

Democrats also forced a vote to protect Medicare and Medicaid from being reduced, but Republicans voted against those, too. Old people and the infirm – to hell with them, right?

Democrats made them vote on every one of these topics – partly so voters could see exactly what was being voted against. And every time, like clockwork, the Republicans voted against the needs of human beings and in support of profits for insurance companies and tax cuts for the extremely wealthy, which paid for parts of these programs. It was sickening to see the votes unfold.

Democrats argued into the wee hours, but this is life under one-party rule. If you voted for Trump and his Republican majority, this is what you wanted. Abject human suffering.”

Drink deep. Here is your victory: A vote to repeal #Obamacare without a replacement is literally a vote to kill people – 25,000+ people A YEAR.

The next morning, after the vote, many people who can only get health care thanks to the ACA took to Twitter to express their horror that the GOP is going full speed ahead with gutting the healthcare legislation without having anything close to an alternative that would keep them covered.

“As a breast cancer survivor, this is a death sentence for me,” one woman tweeted at Rep. Keith Ellison (D -MN).

And she wasn’t alone, as many people who benefit from the ACA used the hashtag #SaveTheACA or #PreexistingCondition to tell the world about how they will literally die if they can’t get access to health care once the ACA is gone. 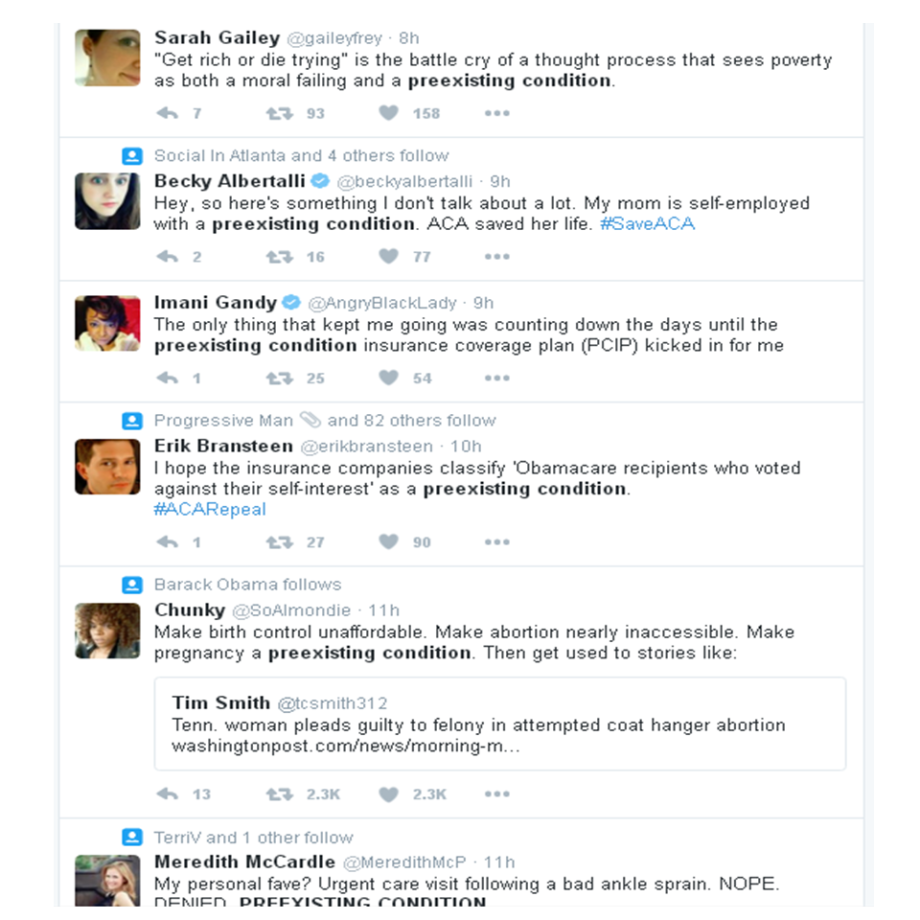 Then there’s that one Facebook nitwit celebrating Obamacare repeal who finds out Obamacare is another name for the ACA he depends on. Republicans are counting on people being uneducated or misinformed about the ACA…they planned on it. 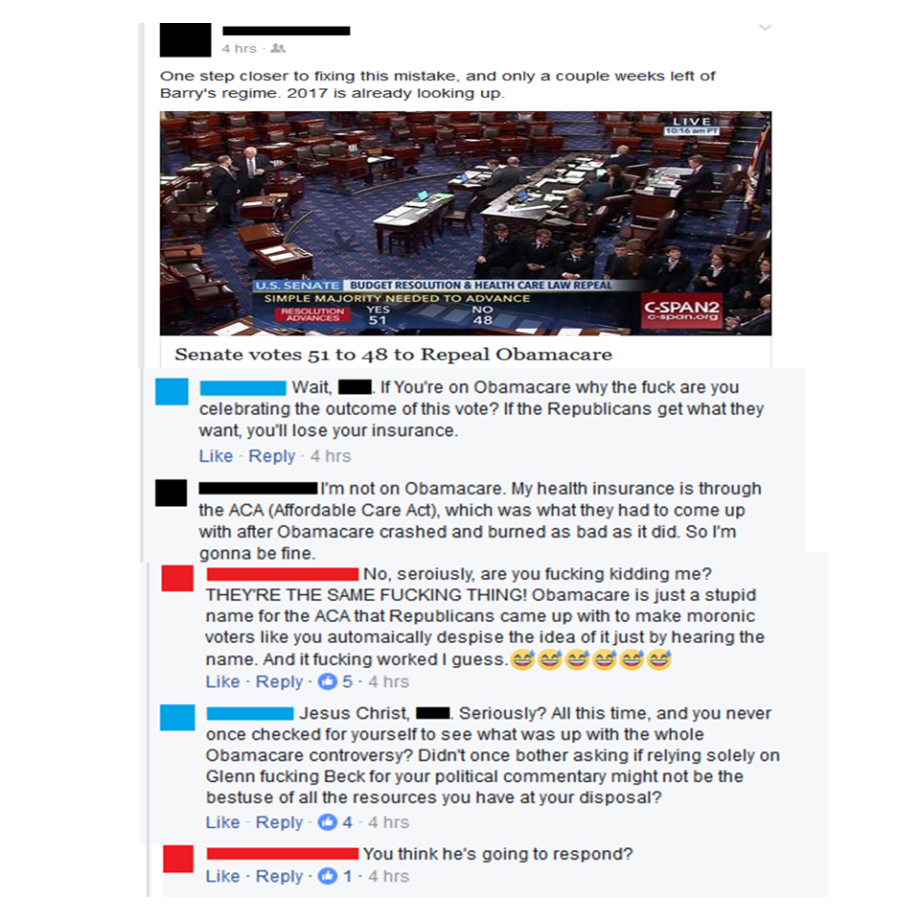 Not one Republican offered a single proposal to replace any of these services – even though Repealing Obamacare affects nearly everyone.

It’s not just for the 20 million people who have health insurance through the individual Obamacare exchanges or Medicaid expansion.

Under Obamacare, senior citizens pay less for Medicare coverage and for their prescription drugs. Many Americans have received free contraceptives, mammograms, colonoscopies and cholesterol tests. And small business employers with older and sicker workers have not been slapped with super-high premiums. The ACA made changes in every part of the health care system.

Click here to see how Obamacare and its full repeal would affect all Americans.

REMINDER: Thanks to Obamacare, US abortion rate hits 45-yr low. Republican plan to repeal will increase it. #SaveACA

America is in the middle of its worst drug epidemic ever. Obamacare’s repeal could make it worse. A new analysis found 2.8 million people with drug use disorders would lose access to treatment if Obamacare is repealed.

ACA repeal gives million-dollar household incomes an average $49K tax cut – nearly the median income for all households. It would give 400 of the richest families in America a tax cut worth an average of $7 million each, even as it yanks health insurance away from low- and middle-income Americans according to a new report from the Center on Budget and Policy Priorities.  In other words, more than 20 million people would lose insurance, while America’s millionaires would get a windfall.

Reducing taxes on the wealthy has been a longtime GOP priority. And last year, when congressional Republicans crafted a prototype of a repeal bill, those upper-income taxes were among the Obamacare provisions that the legislation would have eliminated.

Of course, Republicans have promised to replace the Affordable Care Act with some other coverage scheme. And recently several GOP senators suggested leaving some of the law’s taxes in place, at least temporarily, just to make sure the replacement scheme has sufficient funding to pay for itself. But, there’s no guarantee Republicans can even agree on an Obamacare alternative, which means it’s entirely possible that the alternative to the health care law will turn out to be nothing.

BOTTOM LINE: The ACA works, and it is saving lives.