No matter what Lady Gaga says, we weren’t born this way.

Racism.  How loud we protest, but we are all equally guilty, like it or not.  Racism is learned, you are correct, but despite what Lady Gaga says – we were NOT born this way.  A brief observation of any pre-school playground will confirm this.  Racism is a result of culture and the understandable human tendency to believe their culture is the best or right culture, all others are foreign or somehow ‘wrong’.

Even as I protest and abhor that label, I often find myself thinking racist thoughts that come unbidden into my conscious and sub-conscious thinking. It is instilled into us at an early age and even thought we don’t recognize it for what it is – it is there.  It may not be innate, but it is firmly ingrained. And try as we might, impossible to completely eradicate.

1) The belief that race is the primary determinant of human traits and capacities and that racial difference produces an inherent superiority of a particular race.

2) A racial prejudice or discrimination.

The following was written by a friend of mine who I highly respect and admire for his wise and noble musings.  He’s one smart guy.  As a fellow Southerner, I can appreciate his need to air these thoughts and they are very similar to my own belief’s and my life experiences in more ways than one.  Without further ado, I present Dave’s letter to the Editor of the The Valley/West Point Times-News; printed  Friday, November 2, 2012

Learning to deal with racism and its denial

I have thought long and hard about writing this opinion. I know many of the “folks around here” will be ill met by it and I include most of my family and friends. I guess this is an admission or a confession of sorts.

I am a racist black or white, upside or down and maybe even sideways. I am a racist. We all are racist, all. I don’t care your shape, color, religions or affiliations.

You can be Desmond Tu Tu or the Pope, all are racist. It is to what extent to which we carry it that judges our character. The only criteria in fact for being racist is you are merely proud of your race. Bingo! Racist. We do nothing to achieve our race, so no pride should be taken.

What do we have to be proud of, German Shepherds unleashed on lawful gatherings in Montgomery? “Bull” Conner using clubs and fire hoses? Four little black girls murdered as they made ready for church in Birmingham on a Sunday morning. The sermon to be given that day “The Love That Heals”; shame on any of you who didn’t know that, both conservative and liberal. Saying this does not please me. I grew up in the forties, fifties and sixties.

I read the Atlanta paper when they hung a black man from the only stop light in Lebanon, Tenn. I was at the Lanett Greyhound bus station when the local tough guys boarded the bus carrying the Freedom Riders to Montgomery. Thank goodness not one of the riders challenged the threats from the locals.

I went to an all white school. The black people were taught at an all black school. The black neighborhood, four or five blocks from my house, was the stereo-type of very poor people. The only black people with whom I had contact were the black ladies that Momma paid $6 a day to clean, wash the clothes and mind the kids. My point is as I grew up I was taught my racism. I wasn’t alone, everyone I knew was racist. My mother and father were as close to not racist as anyone, but they too were a part of an older form of racism. My father, who counted the Reverend Henderson Huguley, a black man, as one of the best people to ever live, would listen to Nat King Cole and say, “He sounds just like a white man.” When any one of the “folks around here” says “I’m not a racist” or “don’t make this presidential race about race” these are the same kind of slurs as, “Why some of my best friends are black” responses from the sixties and seventies. Our racism is much more subtle these days, but in many respects it is much more damning. Alabama has more black people in prison than slaves in 1860. Unemployment for non-white hovers around 12 percent here, not counting those who have stopped looking for work.

None of this is an excuse, but everyone learned this way of thinking. It was taught to me just as it was to you by family, friends, neighbors, school, government and our Confederate heritage, there was no way to avoid it. I hold my racism very close, as Don Corleone said, “Hold your friends close, but hold your enemies closer.” I embrace my racism. I hold it tight. I have been working for the last 40 years to rid myself of the stigma and I have realized I could not, but I can see it for what it is and have found ways to spot it on sight. I don’t have to go through the mental gyrations I used to, but it still rears its ugly head now and again, and I just deal with it.

Many of you consider yourselves to be good people, but when someone makes a racist joke you giggle or when someone says I’d rather have a Mormon than a Muslim for President, you don’t challenge this idiocy.

As I mentioned in a previous opinion there are sins of omission and sins of commission, both equally damning. The hardcore will not change. Their racism gives them an identity, a membership in a club that is the antithesis of a good Christian raising. The very liberal will intone, that’s not me. “I’m not a racist. “I hope at least a few of the “folks around here” will find themselves shamed for not knowing the title of that sermon, “The Love That Heals,” and come to grips with the most insidious menace to our society today.

Why do I say all this? The most critical presidential election since FDR is just a few days away. This election will determine the country’s direction for the next decade. I’m not suggesting you vote for anyone or even vote, that’s your business. But make your own choice, unswayed by media, your friends, the political rhetoric, your neighbors or the political parties. I am not suggesting you vote for any part of any political platform, but I do ask you to consider “the content of their character, not the color of their skin.”

Thanks Dave for a wonderful rant.  And special thanks to Donald Wade for his contribution to this article.

As a people, Southerners will deny racism even as they practice it.  White privilege is something we assume is our right, without thinking about what that really means. How often have you heard that blacks should be grateful that they were brought to America?  They could be running around in the jungle if not for the white man!  Somebody owes somebody for that free boat ride over, I guess.

But whites are not alone in their racist attitudes – every person alive is guilty in some shape, fashion, or form. But that does not mean we should abandon our efforts to change.  It may be a change that will never fully be realized, but a change that is still worthy of our efforts.  Racism and its close friends, prejudice and bigotry are all human conditions, but learned ones.

But there is hope for the human race.  With each generation we see more tolerance, if not acceptance of other cultures.  We are fast becoming a global society and diversity is impossible to escape. I am proud of my heritage (well, most of it), but can appreciate how others are equally proud of theirs.  Respect, not fear, should guide us in that. Ignorance of that is based in fear – and fear is the most powerful persuader there is. We must learn to understand and not to pre-judge (although judging is another innate characteristic of the human race).

I will be voting for President Obama this Tuesday and am proud to do so. And race has nothing to do with it.  It’s about his policies and his vision for America. My sincere hope is when other people cast their ballot that they do it based on the man and not the color of his skin. 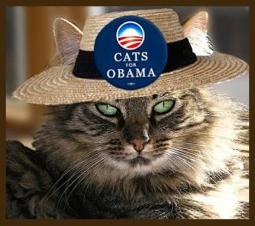 4 comments on “We’re ALL Racist – Deal With It”