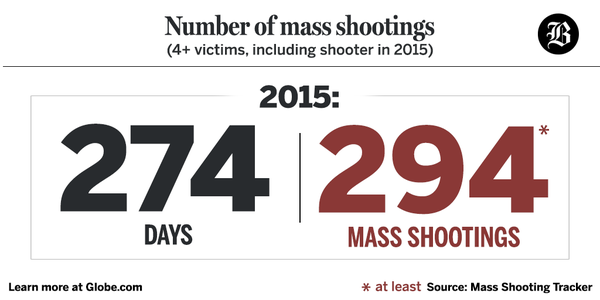 Every time there is a mass shooting (which on average is every sixty four days) one of the key words we hear describing the tragedy is “senseless.” This would suggest the action was without meaning or purpose.

I hate to tell you this, but nothing could be further from the case.

The most recent attacker, Christopher Harper-Mercer, follows the strict pattern of highly-aggrieved men trapped in a cultural paradox from which they cannot escape. His and the other attacks like it, congruent down to sporting military-style clothing, are an attempt to call “society” to task for leaving them behind. To these men, who perceive they are not receiving the level of respect to which they feel deeply entitled, it’s nothing less than a revolution. When you read their posts online they discuss previous attackers like the Dylan Klebold of the Columbine massacre and James Holmes of the Aurora theatre shooting and now Harper-Mercer as a martyr, a hero and most disturbingly, a “warrior” for the cause.

These young men, when you read their writings (and they write a lot), are trapped in ideologies insisting on a natural order where the strong dominate the weak.  Overwhelmingly their stunning number of journals, manifestos and posts show them to be captivated by thinkers and leaders like Nietzsche, Rand and Hitler. Ironically, these typically introverted outsiders fully buy-in to the idea that there should be a ruling class over the “undeserving” in society. Yet, in each case they have come to realize through a pattern of personal setbacks and failures they themselves are not exactly the Übermenschen ole Friedrich described in Thus Spoke Zarathustra. Additionally, they all suffer from acute paranoia, developing a blind rage at those whom they feel have unfairly usurped the power that is rightfully theirs.

The shooting is simply a release of this cognitive dissonance. It fills the strong need to demonstrate in the context of their ideology they are not the losers, the “others” are. Dr. Donald Dutton and a trio of psychologists from the University of Vancouver went and read everything the assembled killers had written to date in 2013 and uncovered this pattern.

“They become and remain fixated and obsessed with rejection by what they see as an elite in-group, whom they see as having unfairly achieved success,” Dutton and his colleagues write in a compelling paper just published in the journal Aggression and Violent Behavior. “Instead of transcending the rejection, they formulate plans to annihilate the transgressors, which they justify as vengeance for the transgressions made against them.”

Ok, so that’s the individual motivation. But now it gets worse, thanks to the Internet with its dark corners like 4chan, these desperate outsiders have begun link up. They have developed an increasingly organized doctrine that blends white supremacist beliefs with garden-variety nihilism, the so-called “mens’ rights movement” pick-up culture, and others to form an ideological toxic sludge of byproducts from Western Civilization. And thanks to the NRA they can arm themselves for considerably less effort than it takes to adopt a cat from the animal shelter.

So, quick quiz: What do you call a group willing to kill innocents and die themselves for an ideology centred around striking back at what they are convinced is an irredeemably oppressive regime? Hint: it rhymes with “Leher-cyst” 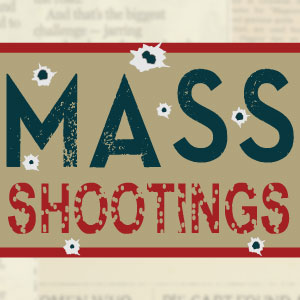 The mass shooting epidemic is, in actuality, best described as a nascent domestic terrorist movement which like many others uses mass-casualty suicide attacks as their primary weapon. We will continue to see it develop and organize if social conditions continue as they have, isolating growing numbers of volatile young from the benefits of our society. The shooters are the tip of the iceberg, once you start poking around online you find a massive bulk of rage under the surface.

We refuse to admit this glaringly obvious fact at our peril. Yes, their ideology is hateful and stupid. But like most uprisings it centers in legitimate grievance, metastasized into it’s own mass of lizard-brain hatreds. Young men don’t regularly kill large numbers of innocent members of their own society in a healthy culture, that is a simple fact.

Think I’m wrong about this? Look at Saudi Arabia, which spawned Al Queda. Unlike what many of my liberal brethren believe, the 9/11 attackers who took down the World Trade Center, attacked the Pentagon and crashed flight 93 into a field in Pennsylvania were not indigent Muslims fighting back against the economic oppression of the West. They were, in actuality, disaffected middle-class young men who found themselves increasingly incapable in their home country of meaningful attainment in the highly stratified power and wealth structure imposed by the House of Saud and supported by its global superpower partner the United States. These men were seduced into giving their lives to murder Americans by terrorist recruiters who prey on finding such personalities and providing their perceptually meaningless lives with a grand purpose.

In 2007 American forces raided a suicide-bomber training camp in Iraq. Interviews with those captured conducted to discover the motivations for suicide attacks it was discovered over half of the recruits had come from a Libyan town called Darna. Here is what researchers found:

The reason why so many of Darnah’s young men had gone to Iraq for suicide missions was not the global jihadi ideology, but an explosive mix of desperation, pride, anger, sense of powerlessness, local tradition of resistance and religious fervor.

This is the exact same set of motivations, minus the organized religious component, we find in most mass shooters here. The researchers also found the attacks were typically organized and carried out from the bottom up, not as top-down attacks directed from an overseeing power. Again, just like here.

So why is this happening in the United States? For similar reasons it happens anywhere else in the world. These young men feel humiliated and powerless. They find themselves incapable of achieving the status they perceive necessary to secure what they want most, typically access to sexual partners (and let’s not forget that suicide attackers in the Islamic tradition are awarded 72 virgins in paradise). They then attack the people who they think are responsible for their standing, typically at a school or a workplace where their daily perceived humiliations are carried out.

Is this so hard to understand? Just like in other countries where there is extreme change and social tension, the formerly empowered group being pushed “out” is fighting back with violence. We continue to perceive these mass shootings to be individual, isolated incidents. They are not. They are like car bombings and transit attacks overseas, individual incidents but linked to a greater struggle.

“Humiliation” is the word you see again and again. That’s the engine driving this, the never-ending loss of face of volatile young men.

Today a growing segment of young adult males will not achieve the material and social success necessary to be attractive mates and form households. By way of comparison, a generation ago in his mid-20s my father had a house, a wife, two kids and a stable job things I was unable to achieve until my ’30s (he would go on to fuck all this up later, but that’s another story). Today Increased economic opportunity and higher educational attainment for women has removed the economic need to be tied down to undesirable dudes. This is a good thing for almost everyone. But for those on the outside, however, it turns social awkwardness and the tail end of the achievement bell curve into a prison planet of isolation. And that generates rage.

If a disaffected young man does not find an identity in some positive group or activity where he can demonstrate a level of mastery, he will find his answers late at night on a message board where an anonymous poster will explain the problem is not him, but instead is women or blacks or Jews or ‘sheeple’ or some other shared lunacy which in the group-reinforcement model that describes closed circles of thought will eat his mind.

And there will be guns around to level the score. Militarized, menacing, assault weapons optimized for mass output. A ticket to forever fame and glory among his new online friends and the ultimate bullhorn to telegraph his resentments at everyone else for less than the cost of a medium-range laptop.

I for one am not surprised that an increasing number of these men, whom the experts call “grievance collectors” have taken this route. What does surprise me is how they are organizing, though I suppose it shouldn’t. Here’s one of many posts in support of the attacker post CoAlpha a “radical free speech” site after the killings at UC Santa Barbara by Elliot Rodger in 2014. CoAlpha is just one place, there are dozens of others.

(note: “Incel” a name they call themselves, meaning “involuntary celibate.”)

We may not want to give this the legitimacy of a “movement” just yet. That risks elevating the perpetrators to the level of “freedom fighters” beyond their own small and marginalized ranks. But we have to let the air out of the support and encouragement for violent attacks carried out by the most unstable of their number.

And the most effective, cheapest and least blood-soaked way to reduce and remove the motivation for the attacks is to alleviate the fundamental grievance of inequity. Put simply- we can’t let a generation of young men flounder. Yes, they can be assholes and no we don’t need as much of what young men are traditionally good at anymore- dangerous, dirty and difficult jobs requiring brute strength and a lack of self-concern, but we need young men to grow up into reliable citizens. And for them to do so there has to be an acceptable pathway, not just a stew of grievances they marinade in until they get their shit together.

Because some won’t and we’ll all end up bearing that cost. And in an increasing number of cases, it will be too much to bear.

2 comments on “The shootings are not senseless”